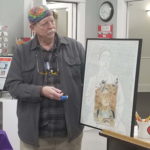 Dr. Leland Gilsen was the State Archaeologist for Oregon from 1978 to 2002 within the State Historic Preservation Office (SHPO) of Oregon State Parks. He has a Ph.D. in Anthropology with a specialization in Archaeology from the University of Arizona. Before coming to Oregon, he was the SHPO archaeologist for the Maryland Historical Trust in Annapolis for two years.

As a graduate student, Dr. Gilsen worked for the National Park Service programs in Tucson: Interagency Archaeological Services (IAS) under Garland Gordon, and (SOAR) Park Management Plans under Keith Anderson. This is where he began work in Cultural Resource Management (CRM).

He has done field work in:

With the help of Hal Gard, Dr. Gilsen began the computerized database and Geographic Information System (GIS) for archeological data stored at SHPO. It consists of maps showing areas surveyed, archaeological sites, and is tied to survey and excavation reports.

As the State Archaeologist, he read, edited, and commented on over 18,000 survey, testing, or excavation reports over a quarter-century. Dr. Gilsen maintained the archaeological site files and issued archaeological permits on state and private land. Leland worked with the BLM, US Forest Service, Corps of Engineers, and Oregon tribes on legal and burial issues. He also worked with the academic community as well as groups such as the Oregon Archaeological Society. He helped author National Register Bulletins.

He created a paper-based geographic information system starting in 1979. He acquired copies of all of the USGS quad maps for Oregon. For un-mapped areas, he used BLM maps (inch to mile). Leland drew in every survey, testing, or excavation project onto the maps as well as all archaeological sites, historic sites and isolated finds. He took over the archaeological site file consisting of site forms for each new site. Dr. Gilsen assigned the unique “Smithsonian number” to each site an mapped them in. Every artifact removed from such a site has the site number written onto that artifact so it can be traced back to a specific geographic location.

Every report was assigned a report number and kept on shelves in numeric sequence. When researchers came in to do a file search, they could look at a map and instantly go to all of the survey reports, testing reports, or excavation reports relevant to the area. In addition they could pull all site forms. Any attached site forms and isolated find form would be found in each report as well.

In addition, the maps showed any patterns in prehistoric land use, data gaps, and other related geographic and ecological factors. Archaeological researchers in Oregon, and from other states, gave the system high praise as it reduced overhead costs in background research.

This web site is designed to bring the scientific study of Oregon’s past to those with an interest in human prehistory.
Dr. Gilsen has been a computer “geek” since the 1970’s. He started out on a TRS-80 Model 1 4k machine with a tape drive. That advanced to a 48k with single density drives as well as a stringy floppy high speed tape system. Later it had double sided drives. Leland was a member of the Portland Area Users Group (PAUG) and then an officer in the early Salem Computer Club. He introduced computers to Oregon State Parks with the 1st IBM micro-computer. He was on the computer development committee for Parks.

Dr. Gilsen also used a micro-computers in Oregon archaeology, encouraging their use by consultants and academics. He was the first to use word processing for the newsletter for the Association of Oregon Archaeologists. Since then, the use of computers has become so pervasive as to seem like it has always been that way.

Dr. Gilsen has a long standing interest in physics, systems theory, thermodynamics and cosmology. His thoughts are summarized in “Recursive Dreams” in the Theory area.

He have been making replica artifacts found among the cultures that once flourished in Oregon’s prehistoric past. For many years he has been building a Traveling Museum of Oregon Prehistory. It covers 14,000+ years as well as the cultures associated with the five ecological zones that merge in this state: NW Coast; Columbia Plateau; Inter-Mountain; Great Basin; and California Oak/Chaparral.